Swan Song, But With Geese

I’m writing by the river again, soaking in every glorious nuance because I’m all too aware this summer’s days are numbered. The first two years I came here, we had warm, lazy Septembers followed by those bonus days Western Oregon often gets in the first half of October, all golden toasty sunlight and piercing blue skies. Last year, though, much of September was cool and wet. I spent several of my river days stretched out across the front seat of my truck because it was just too cold to sit outside. Worse, the weather didn’t allow me to get here in October at all. Winter was hard, the hardest I’ve ever seen in Portland, and spring was laboriously cold and wet. Two hundred and seventeen days passed between my last time at the river in 2016 and my first time in 2017. That’s a full two-thirds of a year. And when I got here, when I backed my truck into my favorite spot in utter disbelief that this was finally happening, my eyes teared and gratitude swelled in my heart. I was home.

Maybe that’s why this year I haven’t been able to get enough. It’s been almost a compulsion, the need to be here. I’ve done everything I can to clear my schedule or organize my office work and business reading so I can bring it with me. I pack my lunch the night before, and lately, my breakfast too. If anything unexpected delays me I start feeling anxious and edgy. But when I get here, all the negativity falls away. I slip into the comfort of this place like most people slip into a pair of perfectly broken-in blue jeans. The calm rolls over me, still and soothing.

I’ve been trying all summer to figure out why I love this place so much, why I feel so driven to come here. Others say it’s beautiful, but there are a lot of beautiful places in Oregon. It’s more than just that. There’s an abundance of trees here and a distinct lack of wires. When I look across the water, to where Highway 43 lies hidden just beyond the smattering of houses, it feels like I’m way out in the country. That’s pretty amazing considering this place is only a few short miles from the sprawling metropolis of Portland. But, again, the magic is more than just that. I suspect part of it is leaving behind my ordinary life with it’s stress and anxiety. Leaving the expectations, the endless pile of things I can’t finish or fix, the labels I’ve been given or chosen but no longer want. In this spot, I define myself. I experience the peace and hope that I wish could infuse every aspect of my life. But again, that’s only part of the explanation. Honestly, I think there’s just something other about this place. Something sacred and healing.

For this year, my time here is growing short. Soon our first heavy rains will hit. We need them to quench the thirsty earth and dowse the wildfires. For those of you who don’t live in the Pacific Northwest, the fire in the Columbia River Gorge probably seems like any other, but to us in the Portland-Vancouver metro area, it’s an epic shock, a stunning sadness. To fathom its magnitude, you have to think of it in terms of what it would mean to Seattle if the Space Needle were to topple, or to New York if the Statue of Liberty met some tragic fate. So, with our beloved Gorge on fire, I’m thankful for that coming rain, but I’m also aware that it summons the final days of my summer. What I have left is the now. And you’d better believe I’m savoring it. 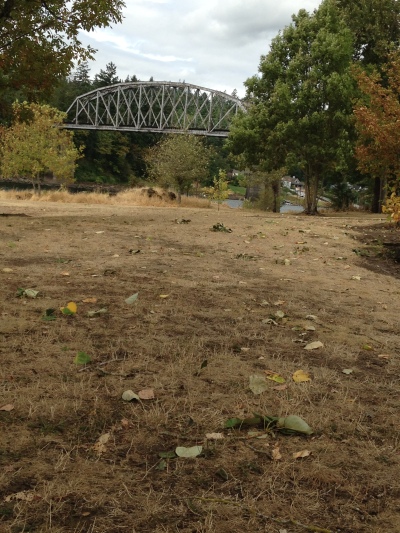 Today, some of the leaves are flushed with gold. The cottonwoods are beginning to toss theirs carelessly to the ground, as if they don’t realize fall is coming and they can’t afford to spare them. Cottonwoods are frivolous that way. As water-lovers, they spend their lives close to the river, so they tend to take the good things in life for granted.

Boats pass by. Canoes and kayaks. Those paddle-boards people stand up on, like Huck Finn on his raft. Jet boats full of customers who’ve paid for a river tour with a few abrupt turns thrown in to give them a thrill. Old, boxy boats. New, streamlined boats. Boats towing water skiers or kids on inner tubes. Occasionally, a sailboat, quiet and graceful, or a yacht with a big, softly chugging engine. I get a lot of satisfaction out of watching people on the river. I enjoy glimpsing their happiness, and it’s enough to vicariously experience the fun they’re having. 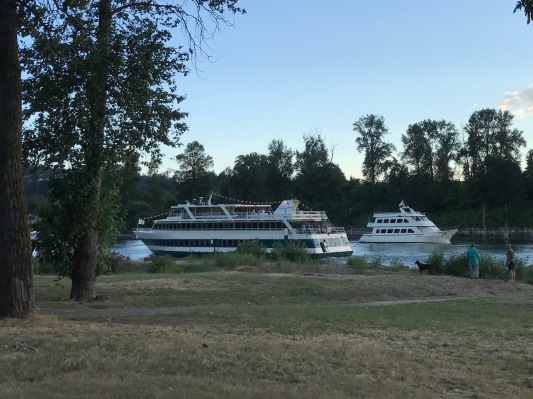 Birds call and sing. Hawks soar and osprey plunge like they’ve been shot, only to snatch a fish from the rippling green water and sail away. Small gaggles of geese fly by, so low it seems like you could almost touch them, the markings on their looming bodies as distinctive as their voices.

People come and go, staying a few minutes or for hours. Moms with small children that climb the boulders. Boisterous teenagers. Couples holding hands as they walk the shoreline. Older folks from the retirement homes up the hill. Some are newcomers, but most are regulars who stop by almost every day to walk their dogs, sit on the rocks, swim, fish, or just hang out. I have friends here, people I look forward to seeing, though in some cases I’ve talked to them for more than a year and still don’t know their names.

Someday, I’ll write a separate post about the interesting individuals I’ve encountered in this refuge, but for now it’s enough to say I’m part of the tribe. For now, it’s enough to say I love this place. The dogs and the people. The cottonwoods and the basalt. The golden, late summer grass. The river lazing by.

This place is more than just a geographical location. It’s a living thing with a heartbeat of its own. A heartbeat that pulses in perfect harmony with mine.

I’m going to miss it.

If you enjoy my books and want to make it easier for me to write them, please consider one of the following:

This entry was posted in Musings and tagged end of summer, My happy place. Bookmark the permalink.

8 Responses to Swan Song, But With Geese